This event has passed.

A miserly and miserable, ever-so-cantankerous Grinch has observed the despicable Christmas joy of the Whos with disdain, from a distance, for decades. Enough! In this favorite holiday story, filled with music and Seussian rhymes, he conceives a dastardly plot to destroy the holiday they love. It’s the smallest of the Whos, tiny Cindy Lou, who extends a hand. Through the combination of kindness and community, we witness not only a change in the course of Who-History, but the size and capacity of the cantankerous Grinch’s heart.

Based on the book How the Grinch Stole Christmas by Dr. Seuss   Book and lyrics by Timothy Mason   Music by Mel Marvin   Directed by Peter C. Brosius Choreography by Linda Talcott Lee

WHICH SHOW IS RIGHT FOR MY STUDENTS?

Silly and made-up language in the style of Dr. Seuss.

Themes and Situations: 1 out of 5 stars
The Grinch is rejected by the Whos and lives alone on an isolated mountain cliff with only his dog Max for company.

Violence & Scariness: 2 out of 5 stars
The Grinch can be intimidating and scary. He steals everything right before Christmas morning. Max (the dog) is pushed around by the Grinch and gets dragged by his tail. Gifts are broken. In a nightmare sequence, distorted projections of Whos laughing are used to create a horror movie-like atmosphere.

Sensory Advisories: 2 out of 5 stars
Musical numbers may be loud and some sound effects are jarring. Fog, dry ice, and haze will be used. The Grinch comes into the audience.

Potentially Anxious Moments: 1 out of 5 stars
Actors interact with audience members and The Grinch comes into the audience. The Grinch is mean to the Whos. Max (the dog) is pushed and dragged by the Grinch.

This is a complete synopsis of the play, so it is full of spoilers. This play is still in development. Content is subject to change until script is finalized.

We start with carolers singing as the mouth to a cave is revealed. Old Max the dog enters, suitcase in paw, reflecting that this cave was once the home that he shared with the Grinch. The scene changes to the past with Whos singing and preparing for the Christmas holiday. Shift to the cave: Young Max happily observes aloud that, “it’s beginning to feel a lot like Christmas.” The Grinch emerges and menacingly announces that he hates Christmas and that his heart is two sizes too small.

We shift to Cindy Lou Who, who has completed making gifts for her family, as well as something for the Grinch. She asks her family about the Grinch. While Cindy Lou wonders about him, The Grinch is imagining what Christmas morning will be like and his cave fills with nightmarish visions of opening presents and feasting. In song, he explains that Christmas is annoying, loud, saccharine, and inauthentic. Meanwhile, the Whos continue to sing carols about gifts and giving until the Grinch has a big idea: he will stop Christmas himself! Max would like to warn the Whos, but the Grinch ties him up.

Back in Whoville, the Whos are shopping for their final gifts. They hustle and bustle happily in and out of shops through the snow until Cindy Lou shrieks and points at…the Grinch,\ right there in the middle of Whoville! The Whos tentatively introduce themselves to him and even invite him to join them for Christmas in the morning. The Grinch appears overly enthusiastic about the discomfort of all. When he meets Cindy Lou she is too nervous to say her name, but her family insists. She introduces herself and the Grinch asks what she would like as a gift. She says she is hoping for a red rocking horse. The Grinch menacingly wishes her the best, then takes his leave to do his own shopping. He buys a red jacket and bunting and elastic and wool and returns to his cave.

Once there, the Grinch crafts himself a Santa Claus costume and puts reindeer antlers on Max. The Grinch sings a song proclaiming that he is the only one of his kind and he claims to be happy as a friendless loner. The Grinch ties Max to a sleigh, packs it with empty bags, cracks a whip at Max, and they take off down to Whoville.

Down at the bottom of the mountain, Grandma, Grandpa, and Mama Who are placing gifts around the tree. Grandpa Who, hard of hearing, keeps mishearing what the others say. The Whos sing about all the preparation for Christmas—the food, the gifts, the decorations— and about how happy the children will be. The Whos go to bed, the children sleeping by the fireplace and tree.

From above the Who house, we hear the Grinch and Max banging and clanging. Suddenly, Max falls from the chimney into the fireplace, quickly followed by the Grinch. As the Grinch looks at all there is to take, Max begs him not to take their food, but the Grinch gleefully replies that he will take it all. He begins to stuff all the gifts, decorations, and food into his bags and as he is dragging the tree to the fireplace, Cindy Lou appears, mistaking the Grinch for Santa Claus, and asks why he is taking the tree. The Grinch thinks quickly and lies saying he is taking it back to his workshop to fix the lights. Cindy Lou thinks this is a fine answer and simply requests he have it back for the morning.

Trying to get her to go away, the Grinch asks why she is not in bed. Cindy Lou begins to cry and throws herself on the Grinch for a hug explaining that she had a bad dream. She asks if he might stay and keep her company. The Grinch explains that, as Santa Claus, he has other homes to visit. Cindy Lou says she understands and assumes he’ll then return home to his friends and family. The Grinch says that no, Santa always spends Christmas alone. Cindy Lou is shocked by this and sings to him about belonging. She sings that regardless of where he is, she will always be thinking of him and that he belongs with her on Christmas. Something begins to change inside the Grinch and at the end of the song, he fixes the light on the tree and returns it to its spot in the room. As Cindy Lou begins to return to bed, the Grinch tenderly asks her what her nightmare was about. She, feeling emboldened, proclaims it was about “that nasty old Grinch!” The Grinch immediately toughens and after Cindy Lou has left, tears the lights off of the tree.

The scene shifts to the next day and the Who’s home is completely empty except for a single log on the fire. Just then, the arm of the Grinch reaches down and snags the log, leaving nothing. The next morning, as the Whos wake up on Christmas, they explore their empty home and Cindy Lou explains that it was a “sort of a Santy Claus.” Then she tells her family that he was very lonely with no family, no friends, and no gifts.

We transition to the Grinch climbing to the top of the mountain in the sleigh with Max. The Grinch is excited to hear the unhappy Whos as they wake up to their ruined Christmas. But as they sit and listen, the Whos begin singing…merrily?! The Grinch is perplexed; he took Christmas away! How could they celebrate without their stuff? The Grinch wonders if Christmas, “doesn’t come from a store. Maybe Christmas…perhaps…Means a little bit more?” Max comforts the Grinch by explaining that as he is one of a kind, he is special. Cindy Lou reprises her song about remembering him and the Grinch is struck that although he took the Christmas, she is still thinking of him. The Grinch begins to think that perhaps by being alone, he is missing out and that he might be beginning to like the Whos—so much, in fact, that it hurts. And just then, his heart grows three sizes! The Grinch tells Max he is wonderful, kisses him, and announces that he’ll take all the Who stuff back.

The sleigh, teetering on the edge of the mountain, begins to slip over the edge just as Max and the Grinch jump in. Old Max, as the narrator, returns to the mouth of the cave, packs up his suitcase, and leaves the stage. Meanwhile, Who carols fill the air. The Grinch arrives in his sleigh and the Whos stand back, unsure. The Grinch, after several attempts, succeeds in wishing the Whos a Merry Christmas. All applaud and cheer. The Grinch hands out gifts to the Whos from his sleigh. As he hands Cindy Lou a red rocking horse, she tells him that although the gifts are nice, he was the most important thing missing from Christmas. Cindy Lou and the Grinch sing together about how they will always be in one another’s heart.

virtual activities on the

Flipgrid is an asynchronous education engagement tool that allows students to access specific media or curriculum-based resources while interacting with classmates and educators via video. CTC’s Flipgrid topics explore technical theatre, mindfulness, songwriting, playwriting, and more. Copy the topics directly to your Flipgrid classroom to get the creativity started!

in person or virtual

CTC transforms the classroom through multi-disciplined interactive workshops that spark creativity, encourage collaboration, and inspire action. Professional teaching artists facilitate engaging and inclusive learning opportunities for students while personalizing each experience to the needs and interests of your students and the learning goals of your classroom. 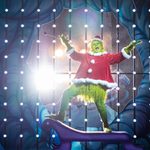 Dr. Seuss’s How the Grinch Stole Christmas is experiencing limited availability for the remainder of the run, with many performances sold out. Tickets may become available due to exchanges or last-minute cancellations, so we encourage you to check back periodically.

In the event you are unable to find tickets for the Grinch performance of your choice, we would love to see you at our upcoming productions of Locomotion, Corduroy, or An American Tail the Musical. All are on sale now, and all make great gifts!

Close
Close
This event has passed.